One of the oldest cities in North America, Richmond existed before the founding of the United States and nearly presided over its dissolution during the Civil War. Today it is a thriving, modern state capital that still bears a remarkable number of sites hailing to its historic past. Thus, the perfect base to explore this fascinating city is the five-star Jefferson Hotel Richmond, a 100-year-old Spanish Baroque building with its own intriguing story to tell.

The story goes that the fabled staircase of the Jefferson Hotel Richmond inspired author Margaret Mitchell as she wrote her masterpiece, “Gone With the Wind.” Although the story may be apocryphal, the staircase remains the eye-catching centerpiece of the hotel’s design to this day. The hotel was built in 1895 by tobacco magnate Lewis Ginter, and its main entertainment until 1948 was live alligators.

Although they no longer grace the hotel with their presence, guests will find statues commemorating the reptiles near the lobby. Elvis Presley is just one of a number of famous guests, which include both Theodore and Franklin Roosevelt, Dolly Parton, Charles Lindbergh and Henry James. 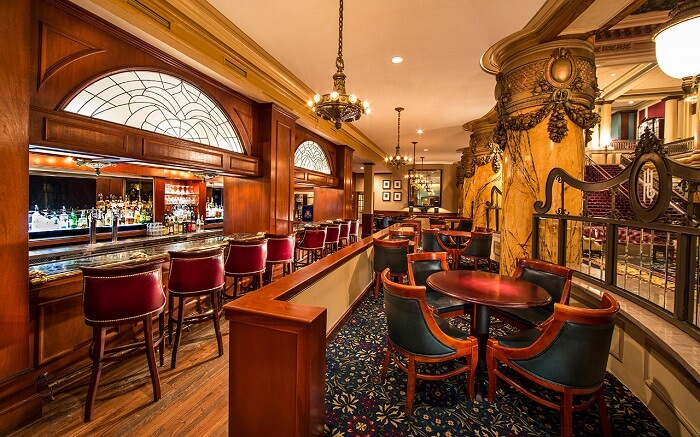 Transportation to local sites of interest using the hotel’s SUV is entirely complimentary. Guests also have use of the hotel’s six bicycles on a first come, first served basis. Bicycle locks and helmets are also available at no extra charge. Bicycles may be used for up to three hours at a time and can be reserved beforehand.

The airport is around 10 miles from the hotel. For those renting a car, follow signs for I-64 West from the airport, merging onto the freeway. After seven miles, take exit 76-A to Chamberlayne Parkway. Then, after nearly a mile, bear right onto North Adams Street. Half a mile down, turn right onto West Grace Street. Take the next left, which will be North Jefferson Street. After 400 feet, take another left onto West Franklin Street. The Jefferson Hotel Richmond will be on the right.

Guests can also book a car service from the hotel or take a taxi from the airport. Amtrak serves the Staples Mill Road Station in Richmond with four train lines, making it a convenient travel option for guests along the Eastern Seaboard.

The pretty James River is an iconic part of the city’s history. Thus, a visit to Shockoe Bottom allows a visit to its banks as well. Ships docking in Richmond would unload their cargo on the Shockoe docks, which were burned in the wake of the Civil War and quickly rebuilt. Cobblestone streets dating to the early 1700s are lined with historic buildings, like the Edgar Allan Poe Museum dedicated to the famous writer. Other highlights include art galleries, a memorial park to African Americans, restaurants and shops.

The tumultuous years of the Civil War are laid out in impeccable detail in this fascinating museum complex that also includes the Southern White House used by Confederate president Jefferson Davis. Explore more than 15,000 carefully curated artifacts and tour the halls of the White House as part of a visit. Furthermore, an anchor from a Confederate battleship is located immediately outside the museum. The battlefield of Appomattox is a two-hour drive from Richmond and is managed by the same trust as the Richmond museum complex, containing further items of historic interest.

This expansive, 100-acre park includes a historic, Victorian-era mansion built in 1893. The house is open for tours and there’s a collection of historic carriages nearby to peruse. Most famous for its gardens, the park features a Japanese garden original to the property, an Italian garden, an arboretum with a wide collection of exotic plants, a butterfly garden, and an herb garden. Moreover, The Children’s Farm hosts a petting zoo and a domestic animal collection. The Nature Preserve is a great spot to observe elk, deer, bobcats, foxes, bears, eagles and other animals native to Virginia.

Overall, the rich history, fascinating Southern culture, and beautiful scenery are all highlights of any visit to Richmond. From the Civil War-era prison on Belle Isle to the soldier’s graves in Hollywood Cemetery, the city provides endless opportunities to learn its history. So if you’ve been a guest at the famous Jefferson Hotel Richmond, let us know all about your visit in the comments below. Moreover, if you enjoy being immersed in rich, American history, another option for you to consider is The Hermitage Hotel in Nashville, Tennessee.