Cavallo Point has a few attractions that make it one of the most exciting hotels in the world. First of all, it has an incredible history, seeing as it was an army base back in the 1800s. Second of all, it’s all about location, location, location with this hotel. It stands proudly right at the foot of the Golden Gate Bridge, which means that the guests can see the famous landmark not only from their rooms but right from their beds.

Apart from that, Cavallo Point is home to a Michelin-starred restaurant, called Murray Circle. As a result, guests and food enthusiast will be able to enjoy only the finest cuisines while they stay at the hotel. And last, but definitely not least, the Cavallo Point Hotel also houses a famous cooking school, which is very acclaimed. Here are more details about this excellent hotel.

Pricing: starts at $419 for double rooms

High season: May to September, but the hotel is open for business at all times 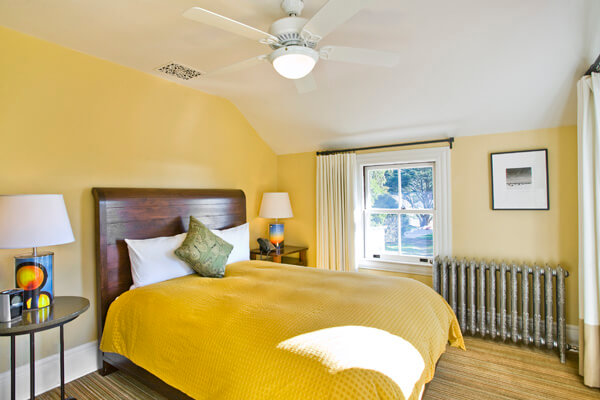 The location’s original name was Fort Baker, and its central buildings were erected in 1886. They belonged to the United States’ Army, and their purpose was to fortify this side of the Golden Gate. Evidently, their military status and need were lost during the ages. However, the buildings still stand and are now a gorgeous hotel ready to receive its guests.

It does so in two types of rooms. Here’s a tip. When you make your reservation, be sure to ask for one type or the other, depending on your taste. There are contemporary and historic rooms available for all guests. All of them have fantastic views. Some of them open to the San Francisco skyline, others to the Golden Gate Bridge itself or the surrounding hills.

There are 68 historical rooms which are part of the old buildings built back in the 1800s. In that era, they were residences for officers. They were restored in 2002 and many of the period details were kept intact, much to the delight of the guests. Examples include the original fireplaces, wainscoting beams, the archways, and the tin ceilings.

Apart from that, there are also 74 contemporary rooms that were built into the hillside to complete the historical ones. They too come with fireplaces and large windows from ceiling to floor, which show the surrounding area in all its splendor. 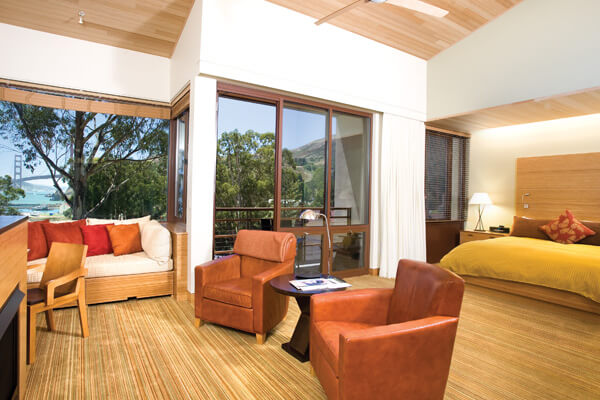 As far as eating at Cavallo Point goes, you are in for a real treat. The hotel’s restaurant, the Murray Circle, is a Michelin star restaurant. It focuses on Californian cuisine, made with local and organic ingredients.

Other than that, you can also take the ferry or the bus to San Francisco. The hotel is also able to offer its guests complimentary shuttles to take them to and from the Ferry Station which lies just one mile away, in Sausalito.

Make sure to visit Ripley’s Believe It or Not Museum, the Wax Museum at Fisherman’s Wharf, the Aquarium of the Bay, and the Boudin Sourdough Museum. Fisherman’s Warf is also home to the famous sea lions that live on Pier 39. Guests can grab some coffee and watch them all day. Or, you can visit Alcatraz, which is just one ferry trip away.

This famous street is in walking distance from the Cavallo Point Hotel, but you can also take a cab or drive your personal car.

It’s difficult to find another hotel that has so many amazing things going on for it at the same time. Therefore, it’s tricky to choose just one. However, we believe it’s a tie between the fact that Cavallo Point is organized in a building erected in 1866 and its location.

The fact that the building is not only very old but has such an amazing historical significance for the United States means that your stay there will be doubly special. As far as the location is concerned, you will not find a better one. Cavallo Point is located right at the foot of the Golden Gate Bridge and in a State Park. These two poinst make for incredible views, hiking trails, and lots of fresh air and relaxation away from the bustling atmosphere of the city.

Cavallo Point is able to offer its guests everything they could possibly want. From stunning vistas, thanks to its unique location, to preserved 150-year old history, to a State Park and wonderful surrounding attractions such as Fisherman’s Warf, Pier 30, and Alcatraz. And, as if that wasn’t enough, the amenities are overly satisfying as well. Michelin star cuisine, a pet-friendly environment, and a unique rose petal welcome for couples looking for romantic times.