The Nobu Hotel Las Vegas is a boutique hotel located in a separate tower at Caesars Palace. It is a quiet retreat from the bright lights and high energy of the Las Vegas Strip. So whether you are in Las Vegas for business, a romantic getaway, or just some R&R, the Nobu Hotel provides a sophisticated, elegant, and tranquil alternative for gatherings, meetings, and peaceful interludes. This detailed review should give you all the information you need about the Nobu Hotel.

The Nobu Hotel is named after Chef Nobuyuki “Nobu” Matsuhisa, one of the three co-founders of Nobu Hospitality, which has 25 restaurants on five continents, this is their first hotel. The other two co-founders are the actors, directors, and producers Robert DeNiro and Meir Teper.

Nobu Hospitality combines Asian traditions with western influences in both the restaurants and the hotel. Overall, the decor emphasizes purple and gold accents, natural materials and textures, simplicity, and comfort with some over-sized elements for a Las Vegas flair. In addition, they use rising Japanese artists focusing on traditional and expressionist designs.

Moreover, bowed bamboo columns surround the exterior of the restaurant and lounge to resemble an Ikebana basket. A ‘shodo’ style calligraphy is the focal point in the rooms. Japanese bathhouses influenced the design of the bathrooms. The over-sized walk-in shower has black Umi tiles, multiple shower heads, and a teak bathing stool. There are stone tiles, teak fittings, and modern fixtures throughout the bathrooms. 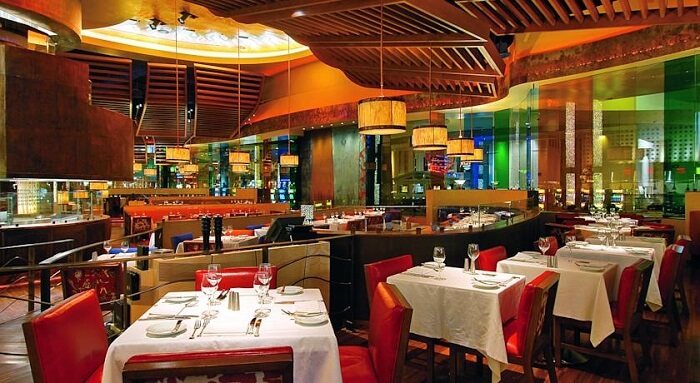 The 1,000 square foot Hakone Suite is named after the Fuji-Hakone National Park. It has berry and gold accents and separate dining and living spaces with a second room option. The Nobu Sake Suite is named after the Japanese sake drums and ranges from 1,300 to 1,950 square feet. It features dark wood and neutral tones with accents of plum. The Penthouse Suite ranges from 2,200 to 4,350 square feet. It features leather sofas, a 90-inch flat screen television, a separate dining area, a billiard table, a stone hearth wall, a curved staircase, and a second-story terrace.

The 10,300-square-foot, three-bedroom Nobu Villa embraces the five senses with fine cuisine, custom music, lemon-ginger scents, and spa services. In addition, it has a sky deck with a full bar, a dining area, a barbecue pit, a whirlpool, a Zen garden, and a fire and water feature. All rooms include personalized concierge assistance, priority access to Nobu Restaurant, high-speed internet access, tea, and herbal sleep oil.

After the restaurant closes, the Nobu Lounge serves items from its own menu. In addition, larger parties can make reservations for the restaurant or dine in one of the suites. In-room dining is also now available 24 hours including a new breakfast menu.

Nobu Hotel Las Vegas guests can enjoy the casino, the pools, the spa, the salon, golf, a fitness center, and shows at Caesars Palace including Celine Dion and Jerry Seinfeld through September.

You can join the hotel management team for a meet and greet and a complimentary cocktail at one of the Nobu Socials on Fridays from 5:30 PM to 6:30 PM.

The Nobu Hotel Las Vegas is 14 minutes from Las Vegas McCarran International (LAS). To get to and from the airport you can rent a car or take a taxi. However, guests staying in the Nobu Sake Suite, Penthouse, and Villa are provided with complimentary round-trip limousine service.

The Fremont Street Experience is a seven-block pedestrian mall in downtown Las Vegas under a 1,500-foot computer graphics screen that provides a multimedia light and sound show after dark. There is the Slotzilla zip line, street performers, shopping, free concerts, and other entertainment.

The Burlesque Hall of Fame Museum is dedicated to preserving the history of burlesque in the United States from the 19th century to the mid-20th century. Open Tuesday through Saturday 10 AM to 6 PM.
Address: 1017 S 1st St #195, Las Vegas, Nevada

Dig This Las Vegas is a completely different experience. It allows anyone over the age of 13 to operate bulldozers and excavators. Open daily from 10 AM to 3:30 PM.
Address: 3012 S Rancho Dr, Las Vegas, Nevada

The Nobu Hotel Las Vegas will provide a relaxing break from the high energy of Las Vegas. Make your reservations today and when you return, share your experience with us in a comment below! And if you wish to see more of the sparkle and glamour that Las Vegas is known for, another option for you to consider is the Aria Sky Suites.