Situated between Europe and Asia, Turkey has a coastline blessed with fantastic beaches and a rich culture filled with an intricate heritage. Through the centuries it has been a popular tourist hot-spot, and in modern times, it continues to receive thousands of visitors – especially since Iştanbul was voted as Europe’s top cultural site in 2010.

Read on to discover the best beaches, where you should go to pamper yourself, and what other entertainments are on offer. 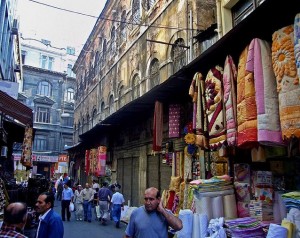 When packing for the beach, remember that very few Turkish beaches have lifeguards so ensure you’re a competent swimmer, and if you aren’t bring a friend who can assist you if you start sucking water / things go wrong.

A spa treat while you’re on holiday is never amiss, and the Kempinski Hotel in Barbaros Bay has an incredibly luxurious spa attached. For a full body pamper session, make sure that a hamam treatment is included in your massage of choice, like the signature ‘Sense of Serenity’ massage. Hamam is the name for a traditional Turkish bath and what it consists of is: a guest stripping down and sits in a sauna, then a steam room to start sweating, then getting rinsed off. This is followed by an indulgent scrub using a type of foam which is massaged into the skin and scours off dead skin cells, before being rinsed off. Finally, you’ll receive the actual massage treatment. The entire process is nothing short of heavenly!

Shopping at the markets should be the number one alternative entertainment on offer, due in part to the bazaar haggling which is expected from tourists, and also for the sheer number of items and shops that are crammed together. The Grand Bazaar in Iştanbul is highly recommended.

Ankara is the second capital city of Turkey, and has a number of entertainment spots. It is often not perceived as being as glamorous as other places which tout a variety of ruins, but it has two top class museums: the Museum of Anatolian Civilisations and the Ethnographic Museum.

Iştanbul is a veritable hub of activity with a large number of bars, clubs, inns, music venues and other entertainments. Notable mentions include the Q Jazz Club& Bar inside Les Ottomans, and the Belfast Pub, that plays soft Irish music and has plenty of Turkish patrons.

About the Author: Roseanna McBain is a happily married 25 year-old with a passion for travel, and adventure. She is a writer for TravelGround, and in her free time she reads up on other cultures, myths, religions, and histories.