Recently, we are big fans of Italy and since last time we talked about sights in Florence, today we are exploring another part of this great country, marked by history and culture, namely Venice. Venice is the capital of the Veneto region of Italy and is situated in the north- east of the country on numerous small islands that are part of the Venetian Lagoon. This City of Bridges, as it is nicknamed, stretches across the streams of Po and Piave rivers. Here are some top tourist attractions in Venice you are not allowed to miss.

Basilica di San Marco is the most famous church in Venice and one of the finest examples of Byzantine architecture. It is located in Piazza San Marco. Originally, the church was a chapel for the Venetians leaders. Starting with 1807, it was the seat of the Patriarch of Venice. Due to its opulent form, decorated with Byzantine mosaics, and its status as a symbol of power and wealth, the Venetian church was also called Chiesa d’Oro, The Golden Church.

The exterior of the church is divided into five arches separated by columns decorated with polychrome marble. Above the central door is a gilded mosaic from the XIX century, representing the Last Judgment. At the top of the church there are the statues of four warrior saints and that of San Marco, who watches over the city. Above the central window of the facade, under the statue of San Marc, is the winged lion (symbol of the church) and in the middle balcony are some Roman horses.

Piazza San Marco is the most famous market in Venice surrounded by great cafes and boutiques. In New York every tourist must go to Times Square, in London Trafalgar Square or Piccadilly Circus are a must see, in Paris it is necessary to cross the Concorde Square. Their equivalent in Venice and the place where every tourist has to walk is Piazza San Marco.

It differs from its foreign correspondents in two major aspects: it is more attractive and has not been corrupted by automobile traffic. Napoleon called the Piazza San Marco the most beautiful reception of Europe.

Although Venice is divided into islands and canals, the Grand Canal is the only really great one. It has a mirror S shape and is about 3.8 km long, with an average depth of five meters.

The Grand Canal is the highest-rated neighborhood of Venice: the houses are older (built between the XIII – XVIII century), decorations are much higher scale and it has the easiest transport boats with the largest boat traffic in the city. It is normal when you consider that this canal offers greater opportunities for any visitor to see the buildings that it has on one side and another. 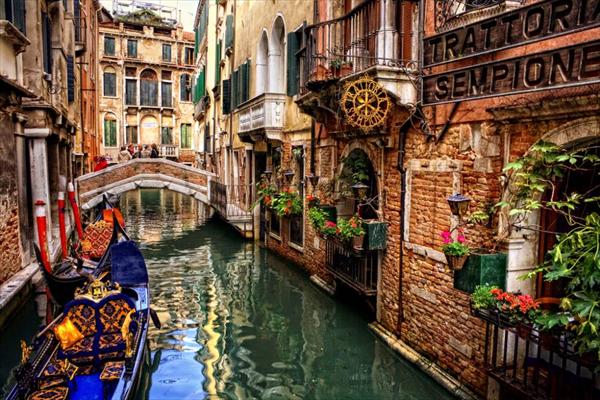 Among the tourist attractions in Venice, you should not miss the Church of Santa Maria Gloriosa dei Frari. It is the largest church in Venice and it is in the middle of San Polo district. The imposing brick edifice is built in the Italian Gothic style.

Like with other many Venetian churches, the exterior is simple, no prints and the interior only contains the wooden wall of the choir. Originally built in the XIII century, the Church of Santa Maria Gloriosa dei Frari Venice hosts many art works such as The Virgin with Child and Saints which dates from 1482 and The Virgin of Pesaro Family, which was burned in the church.

Doge’s Palace in Venice is a superb example of Venetian Gothic architecture. It served as Senate, administrative center, court, public archive and prison until 1797 when the Venetian Republic fell

First built in the ninth century, the Doge’s Palace was rebuilt several times, but since 1340, with the construction of Hall Councils, it really began to take shape. Choosing the doge was a particularity of this city which lasted 1000 years from the year 697 until 1789. In the Council Hall there are paintings of the first 76 doges.

The decorations of the palace are impressive. The 36 carvings in the lower columns include portraits of animals, flowers and representations of the months of the year. The sculptures also contain scenes of the judgment of Solomon, Noah, Adam and Eve, the Archangel Gabriel etc.

These are just some of the few top tourist attractions in Venice. If you decide to travel in this region, it’s also a good idea not to miss: Ca’ d’Oro, San Giorgio Maggiore, Rialto Bridge, Basilica Santa Maria della Salute, Burano neighborhood, Venice Lagoon and many more.