Modernist architectural masterpieces, cheek-by-jowl buildings, lively people, hidden squares, relaxing sandy beaches, incredible nightlife… So many words for one magnificent city, Barcelona! Probably the most interesting and diverse city of Europe.There is something for everyone here, and I mean everyone. There are so many things to say about the Catalan capital that addressing it in only one post would not do it justice. For this reason I have decided to slice it up and serve it in smaller, more detailed portions. For the first part I have chosen to focus on the architectural attractions embodied through Gaudi’s structures.

There is no way to truly comprehend the genius of his work until you get the chance to see it with your own eyes. His buildings have become an absolute symbol which contribute to the small puzzle that is Barcelona. Bizzare perhaps, but it is the little things that make Barcelona what it is today.

Sagrada Familia is probably the most elaborate work of architecture constructed in the last two hundred years, and it is without a doubt Gaudi’s crown jewel. It is actually a giant basillica framed within an intricate structure ornate with curvaceous elements and extremely well detailed facades depicting different scenes inspired by nature and religion. The original plans depicted eighteen spires, each representing biblical characters, the tallest one resembling Jesus Christ. The full height of the church is a bit smaller than the surrounding hills because the architect never intended for his work to surpass that of God. The interior is breath taking and the level of detail is absolutely astonishing. Sagrada Familia was never completed because Gaudí never wanted it to be perfect but it is definitely an absolute must see if the road ever takes you to beautiful Barcelona. 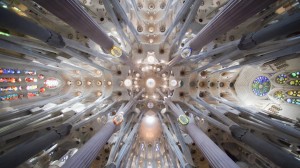 Another controversial design characterised by an undulating facade enclosed by wrought iron balconies is that of the Mila House. The concept of the house governed by the rule of no straight lines captures the very essence of Gaudi’s architecture in a Catalan modernist vision. The interior is defined by non-structural elements which create an interesting rhythm complemented by unique furniture pieces.

In collaboration with Joseph. M Jujol , Gaudi restored the so-called House of Bones. You are probably not familiar with its popular label but I’m sure that the name Batlo House brings up images of the notorious flowing sculpted stone facade. The house has earned its name because from the outside it looks like a skeleton due to its visceral organic structure. Probably the most interesting thing about this work is the ground floor interior decorated with a graceful staircase.

Gaudi, who was always inspired by natural elements was the one to design the public space of Park Güell. It is basically a municipal garden flanked by odd shaped structures ornate with vibrantly colored mosaic tiles. The gardens offer a spectacular view of Barcelona city from a truly unique setting.

“What I saw in Barcelona – Gaudí – was the work of such strength, such faith, of an extraordinary technical capacity, manifested during a whole life of genius; of a man who carved the stones before his eyes in well thought out pattern. Gaudí is the ‘builder’ of the turn of the century, a man adept with stone, iron and brick.His glory is seen today in his country.”

Indeed it is the strength of his architecture that echoed throughout the years and through it played a deciding role in modeling the cityscape of Barcelona into what it is today.