If you have decided to let yourself be inspired by literature in order to find the best destination for your next vacation and you have chosen Paris, the place where Da Vinci Code was set, then you have made a great choice. Paris has a lot to offer in terms of culture, art, fashion or cuisine, but before you get into experiencing the Parisian lifestyle, there are a few tips on public transport in Paris you should know.

Public transport in Paris is provided by RATP and it includes the underground subway system, RER trains, buses and night buses, Montmartrobus and the Montmartre funicular, and all other means of transportation that support the same type of tickets and passes. You can buy individual tickets, packages of ten trips or a Paris Visite Metro Pass, a card specifically designed for tourists that offers unlimited travel.

The metro in Paris

The Paris metro is a monument of efficiency that ensures fast and safe transport for more than nine million passengers daily. Paris metro has over 200 km of tracks and more than 380 stations. First impressions can be unpleasant because trains are pretty crowded and stations may appear dirty. This is due probably to the huge number of passengers using the Paris metro network.

There are 16 subway lines numbered from 1 to 14 and two named 3 bis and 7 bis, and the direction is indicated by the last train station, at the end of the line. For example on line 1 subway, trains go to Chateau de Vincennes and La Defense. Parisian metro maps can be found at tourist information centers and are free at every subway station.

To get into the subway, you must enter a ticket, go through the turnstile and lift the ticket stamped on the side of the barrier. Keep your ticket stamped when traveling because you might be forced to show your ticket to a controller. You can change lines to get to your destination without using another ticket.

Regional trains extend the public transport network to the suburbs of Paris. Known as RER, the five train routes are identified by the letters A, B, C, D and E. As subway trains, RER trains run from 5:30 am until 12:30 at night.

Metro tickets can be used on RER only when they travel within Paris. To travel outside of Paris by RER, you need another ticket. The more expensive fares for RER apply for airports and to Disneyland Paris and Versailles. 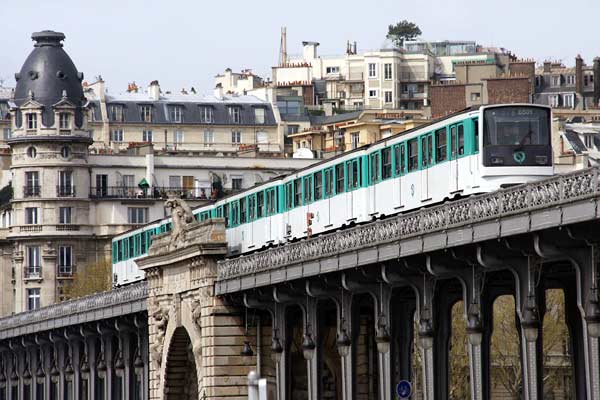 When it comes to tips on public transport in Paris, you should know that bus routes are also numbered and begin to run after 6:30 am. The last bus usually leaves at 8:30 pm and 9:30 pm, but there are some lines that run at each half an hour after midnight – these are indicated in bus stations. There are night buses, called Noctambus that run hourly between Chatelet and the main entrance gates of Paris. The Paris night buses run between 1:00 am and 5:00 am. Night buses are identified by letters and not by numbers such as those that run during the day.

Bus route maps are available in stations and on buses. Most shelters at bus stops have a station name displayed to help you easily identify where you are.

A special bus route called Montmartrobus, line number 64, runs only in the Montmartre district. Tax on this line is the same as for all the others. Montmartre funicular goes up towards Sacre Coeur Basilica. For both the ascent and the descent with the funicular, you need one ticket.

A ticket for all means of public transportation in Paris costs € 1.5 and can be purchased from bus drivers or from the offices of the metro. A pack of 10 trips costs € 11.10 and can be purchased in subway stations, in some bus stops, from some shops, especially those for cigarettes or newspapers that have the RATP sign.

A metro ride requires one ticket even if you change the line, but you need a bus ticket for each line. Some buses have higher rates. Orlybus costs € 5.5 and Roissybus is € 8. Prices for Noctambus may vary and can only be purchased on the bus.

RER trains can use metro tickets to travel inside Paris, but for the suburbs, fare varies depending on the destination and you need to buy a ticket for each journey.

By purchasing a special permit called Paris Visite, you can avoid waiting in line to buy tickets every time. A Paris Visite pass gives the holder unlimited travel on all public transport in Paris, including Metro, RER , bus and funicular Montmartre and even SNCF trains in Ile de France.

Permits are valid for two, three or five consecutive days for three or six zones. Those who purchase such a pass receive discounts up to 35% when visiting certain sights and attractions in Paris.

Do you know any other tips on public transport in Paris?